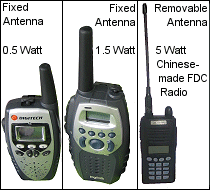 The main problem is the small aerial on hand-held radios – they aren’t very efficient, and the antenna is a bigger influence on transmission range than the power of the radio.  Radios of lower power... 0.5-Watt up to about 2-Watt, all have fixed antennas, usually stubby little eighth- or quarter-wave ones.  Taller half-wave antennas ( about 20cm high ) increase range, but you can’t use one if the radio has a fixed antenna.  Detachable antennas, which are commonly fitted to radios of 3-Watt power or more, are much better.  You can either attach a larger one for better range or use an external full-wave antenna for maximum range, and quite cheaply, too ( less than $50 ).