BRP Australia imports Spyders in knocked-down form from the BRP factory, then relies on individual Dealers around the country to assemble them.  Most BRP Dealers are motorcycle or jet-ski specialists and do not have wheel-alignment facilities.  Few specialist car alignment firms can handle a Spyder, either.  Up until early 2014, when BRP finally admitted that their factory assembly-line methods *might* lead to incorrect wheel alignment, Dealers were NOT REQUIRED to check that before selling a new Spyder.  They just did a pre-sale assembly from the crate and a safety check but, by the time they hit the road in Australia, alignment was wrong, and often by a huge amount.  BRP is now encouraging Dealers to invest in laser alignment equipment, so this alignment problem should eventually decrease...  but the leopard has not changed its spots.  The new F3 Spyder was released in early 2015 in the USA and within a month owners were complaining that their brand-new bikes had badly-aligned front wheels!  Oh, dear...  here comes that déja vu feeling.
A second problem is the BRP Workshop Manual.  For ALL Dealers, for all types of vehicles, the manufacturer’s Workshop Manual is their ‘Bible’, so you cannot blame a Dealer for sticking to that.  But the method described in BRP’s Workshop Manual is inaccurate, very long-winded ( = expensive ), and the instructions simply incorrect, so that Spyders aligned ‘by the book’ have virtually zero toe-in, which becomes toe-out in motion, making them very nervous and twitchy.
Another common complaint is that the bike pulls very slightly to the left here, or to the right in Canada / USA / Europe.  This is just the camber of the road – Spyders are much lighter than cars, and have very direct Power Steering with no ‘stiffness’ like a car’s steering, so they don’t keep tracking straight if you let go the bars...  they start to veer ‘downhill’.  Using wheel alignment to compensate really just changes the handlebar center...  but the problem can also be caused by incorrect setting of the DPS sensor center, making the Power Steering think that the bike is cornering when it is not.  This can cause quite pronounced veering, and connecting BRP’s proprietary BUDS diagnostic system to reset the DPS center is the only remedy for that...  it will cost you about $80 even though it will take only seconds.
A further important factor is that the suspension is a collection of many ball-joints and bushes, and all of them have a little bit of play.  When the suspension is working over bumps or through corners, wheel alignment WILL change momentarily, stretching towards additional toe-OUT, because the Spyder has rear-wheel-drive...  it is always pushing the mass of the front-end geometry, causing it to spread ( front-wheel drive would have the opposite effect ).
Toe-in or Toe-out?
Front wheels have CAMBER ( leaning in or out at the top ), CASTER ( raking backward on its vertical axis ) and toe-in or toe-out ( pigeon-toed or splay-footed ).  Camber and Caster is factory-set on a Spyder, but toe-in / out can be adjusted. 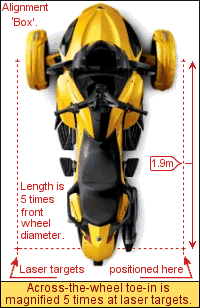 Scaling it up:  The ‘Alignment Box’ Method.
Measuring small distances is very difficult.  So the laser is used to describe a ‘box’ about the size of the entire bike, so that the toe-in over this greatly-expanded distance can be measured more accurately.  It just happens that the length of a Spyder, from the center of the front wheel to just aft of the rear tyre’s contact patch is 1.9 meters ( close to the six feet specified by BRP ), or exactly 5 times the diameter of the front wheel ( 15” / 380mm for 2008-2012 models, or 16” / 405mm for 2013- models ).
That’s a handy 5X magnification factor.  Instead of a 1mm, 2mm or 3mm toe-in across-the-wheel, a magnified 5mm, 10mm or 15mm toe-in at the end of the Box is much easier to measure and adjust, using the laser level as a laser pointer rather than just as a straight-edge as the BRP method specifies.
It also makes it easy to spot when one wheel is on a different alignment to the other one, relative to the chassis.  It is quite common to find one wheel toed-in while the other is toed-out ( causes tracking or crabbing problems ), or to find both wheels toed-out instead of toed-in ( causes tyre scrubbing and wandering ).  Recent tests ( ST models ) have revealed uneven alignment with the right tyre scrubbing, even though the left wheel was more out of alignment.  The Alignment Box method allowed this uneven alignment to be detected because each wheel is measured against the whole chassis, not just against the other wheel.  Another factor is that we drive on the left, so that the left ( downhill ) wheel carries most of the steering load, and the relatively unloaded right ( uphill ) tyre tends to scrub the most.
So what’s best?
The almost-zero toe-in works well enough on dead-smooth roads, but tends to dance around erratically over real-world bumpy roads.  It is just TOO neutral, too unpredictable, too ‘lively’.  A larger toe-in of 1.0mm worked better for a bike with stiffer-than-normal front suspension, and bikes with normal front suspension need more toe-in.
With zero toe-in, a Spyder with standard front suspension was very twitchy.  Setting it to 2mm toe-in produced good straight-line tracking – no nervousness as before.  It then had fairly neutral corner turn-in and tracking, even over rough surfaces or negative camber, with little or no mid-corner ‘bite’.  A good ‘touring’ setup.  After time for thorough testing, we have now pulled that back to 1.5mm toe-in, closer to the more ‘active’ range.  This now seems perfect.
Rough or uneven roads are far more common here than billiard-table-smooth roads, so a larger amount of toe-in than recommended by BRP seems the sensible way to go.  There are many enthusiastic endorsements of the Lamonster alignment service, using 3mm ( 1/8” ) toe-in, mostly on RT models, even though that seems excessive.  But it’s just the traditional toe-in used on cars for decades.
Experiments with all models have now led to definite practical toe-in specs to suit average roads.  Basically, GS/RS and ST models are similar, while RT models are a bit heavier.  So 1.5mm across-the-wheel suits the lighter models, and 2.0mm across-the-wheel suits the heavier model.  For bikes with modified, stiffer front suspension, that figure can be reduced by 0.5mm, and for bikes with heavier-than-normal loads the figure should be increased by 0.5mm.  Riding style will also influence this, since suspension deflection tends to cause momentary toe-out bias...  if the toe-in is close to zero, it becomes toe-out in motion, and spreads further momentarily at times.  2013> models with the new chassis exhibit more toe-out bias under suspension compression than the barely-detectable amount on the old chassis, so adding about 0.5mm toe-in for new-chassis models is also sensible.
Having proper wheel alignment DOES make a Spyder much easier to ride!
DIY WHEEL ALIGNMENT:
YOU can do your own alignment.  Using the ‘Alignment Box’ system, with small magnetic-base laser levels in a procedure using standoff jigs that are within the skills of the average DIY-er.  A separate page details the gear needed for DIY alignments, or you might choose to use the gear that I made, now available as an Alignment Kit – useful if you live in an Australian rural area, far from the nearest Dealer.  View that page here.